Making Mikulášská Street a through road again and completing the reconstruction of the railway bridges leading over it, the final phase of the Pilsen Uzel, the 2nd building – the reconstruction of the passenger railway station, including bridges Mikulášská. The joint venture of contractors of new bridges (OHL ŽS and Metrostav) today handed this part of the building over to use and in this way respected the provisions of the contract that this part will become operational before the start of the new school year.

The new north bridge was already put into operation in 2017. The space under the bridge, closer to the Americká street, in direction to Slovany has been extended to three lanes, where two lanes are used for straight direction and one for turning left to the main entrance of the railway building. There will also be three lanes in the direction to the center, one merging lane from the space in front of the station. The extended space under the bridges also allowed to build a separate cycle track along the sidewalk in the direction from the center to Slovany.

The works to remove the southern bridge began this January. Both bridges have continuously served over 100 years. The works in the southern part of the Pilsen railway station will continue. The construction should be done at the end of November and December of this year.

The completion of this part of the project will provide the people in Pilsen a better access to the railway station, new lanes will improve the road traffic. More than 60 cars will be able to park in the car park in front of the main entrance to the station building, in the case of public transport interruption, the car park can also be used for replacement bus services.

The final completion of the contract for more than 1.35 billion CZK, roughly two-thirds of the subsidy from EU funds, is planned for the first half of 2019. 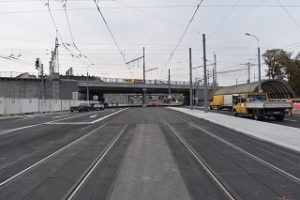 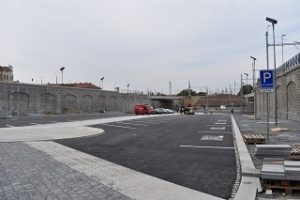 We have participated in the Transport Conference and the Road Fair
9. 9. 2022
Go to Top